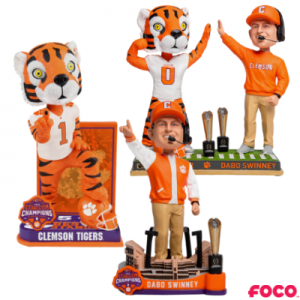 The first bobblehead features The Tiger with his leg on top of a miniature Clemson football helmet while holding up the #1 sign and commemorates the team’s undefeated season. Included behind the mascot is a team logo backdrop with the schedule and scores from Clemson’s undefeated season on the reverse side. The base is adorned with a 3D championship logo and “15-0 CLEMSON FOOTBALL – BEST IS THE STANDARD” logo on the top of the base.

The limited edition, handcrafted bobbleheads, which are being produced by FOCO, are expected to ship in August 2019. The mascot bobblehead is $45, the Dabo bobblehead is $55 and the dual bobblehead is $70, and shipping is a flat rate of $8 per order. In addition to being available on the Hall of Fame and Museum’s website, fans can also find them at FOCO.com.

About the National Bobblehead Hall of Fame and Museum

Previously known as Team Beans, LLC and Forever Collectibles, FOCO is a leading manufacturer of sports and entertainment merchandise celebrating more than 17 years in the industry. The company’s ever-growing product lines include apparel, accessories, toys, collectibles, novelties, footwear, holiday and more. FOCO is licensed with all major sports leagues including the NFL, MLB, NBA, NHL, NASCAR, MLS and over 100 colleges and universities as well as entertainment properties such as Disney, Warner Bros/DC Comics, Nickelodeon and Sanrio. Please reach out to Matthew Katz, Licensing Manager, mkatz@foco.com for more information.