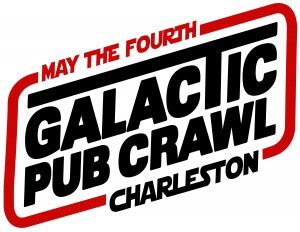 On May the 4th, also known as International Star Warys Day, a Galactic Pub Crawl will be held in downtown Charleston with the help of event producer Markster Con.

Although this is essentially a Star Wars-themed event, organizers says the “galactic” name and theme will also attract other sci-fi fandoms such as Doctor Who, Firefly, Star Trek, Stargate, Battlestar Gallactic and others.

Attendees will be treated to:

Click here for tickets and further information. The event runs from 4 pm to 11 pm.

The Galactic Pub Crawl is produced by Markster Con, a year-round, full-time event production company geared mainly towards the adult-aged geek and alternative demographic with a heavy dose of costuming.

Voices of Fashion Weekend to Debut in June