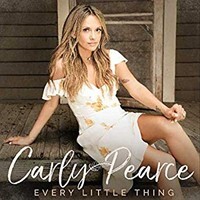 She may not have made a big a splash yet as some of her contemporaries have made, but Carly Pearce continues to create positive ripples in her country music career. The Kentucky native’s ‘Every Little Thing’ off the debut album of the same name, earned the 28 year old singer songwriter a number one hit on Billboard’s County Airplay charts.

While traditional country radio is still warming up to Pearce, she has topped the charts on SiriusXM’s ‘The Highway‘ channel with ‘If My Name Was Whiskey‘ and the follow up ‘Hide The Wine’. Hoping to gain even more momentum her latest release ‘Closer To You’ is available through online formats and will be included in her sophomore album. It appears Pearce is making all the right moves in Music City and people are beginning to notice this rising voice from Nashville.

“Satellite radio and other formats like Spotify and I-Tunes have allowed newer artists such as myself more avenues to showcase their music, so that’s a good thing.” She adds traditional radio stations (over the airwaves) are tougher to crack. “Certainly every artist wants to have their songs played on every format possible. With traditional radio it’s always been harder and more obscure. There are only so many slots they can fill. Often you don’t have the luxury unless you have the proper backing or are established.”

She admits having more avenues too market your music doesn’t make it any easier to obtain airplay, or gain a following. “Reaching fans and audiences through satellite radio, social media, and online distribution is great, and can very useful. It doesn’t really matter how you reach the listener or the people playing your songs, they still have to like the music.”

For Pearce, her musical journey began 12 years ago when she left high school early to begin working full time at Dollywood Theme Park in Pigeon Forge. “I knew that singing and performing live was something I wanted to do. I saw an audition for Dollywood and convinced my parents to let me try out. They knew I was a good student and not just another kid trying to bail out of school.” She completed her education through home schooling.

Over two years performing five days a week at the theme park, Pearce admits she learned quite a bit. “I got a crash course on entertaining at Dollywood. If you want to be a country singer it’s no doubt one of the best places to start, especially at a young age. It was a great introduction for me to the entertainment industry. It not only helped me as a singer, but with stage presence. I had a lot fun working at Dollywood.”

At 19 she relocated to Nashville signing a development deal with Sony Records. Although her time with Sony proved unsuccessful it did open doors for Pearce. “Sometimes disappointment is part of the journey. You learn from it and move on.” 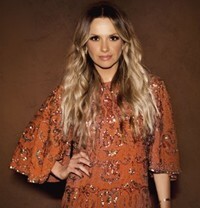 For the past several years Pearce has been honing her craft as both an entertainer and a songwriter. “I’ve always tried to stay busy even before I had songs on the radio or a record deal. When it was just me I acted as my own tour manager. I drove the van, I booked the clubs and venues I played at. You’re always trying to do what’s right to better your career and make the right connections in Nashville.”

When it comes to songwriting Pearce takes a straightforward approach. “I try to keep it very simple. I write from my own experiences because I think that resonates with the listeners. If you’re really authentic you connect with the song better.” Many of her songs turn out to be ballads. “I do write a lot of ballads. I don’t plan it that way, it just happens. One thing for certain, I’m not afraid to give my songs what they need, whether it’s an up-tempo song or ends up being a ballad.”

While some country music lovers might be new to Pearce, still this side of 30, she has appeared on the Grand Old Opry stage more than 60 plus times. “Tonight (March 29) will make my 65th appearance at the Opry. I’ve been really blessed there. They took me in back in 2015, way before I had a record deal and they keep inviting me back. This is where all the legends have performed. I hope performing at the Opry stays with me no matter where my career takes me.”

Pearce however is no stranger to larger concert audiences. Over the past couple of years she has opened for Blake Shelton, Rascal Flatts, Luke Bryan, and Brett Young. During the summer of 2019 she will open for Jason Aldean and Kane Brown on Aldean’s ‘Ride All Night’ tour. “I’ve been able to cross a lot of things off my bucket list early in my career. The artists I’ve opened for, and having performed on the Grand Old Opry as much as I have are milestones for me.”

There’s not much Carly Pearce would change about her life right now. “I’m very lucky to be able to sing and perform for a living. I don’t take any of that for granted.” Perhaps the only thing she’s changed over the years was her name. Carly was born Carly Slusser back in 1990. “Slusser was kind of a hard name for radio, so I changed it. But I didn’t stray far. Pearce is my mother’s maiden name.”

When her follow up album is complete Pearce is expecting fans will see a different side of her. “Hopefully I’ve grown as an artist.” On her debut release she wrote eight of the 13 tracks but admits she’s not opposed to singing songs written by other songwriters. “If I connect with the song than I have no problem. This town (Nashville) is overflowing with great talent. The bottom line for recording a song, is to somehow make the song yours.” 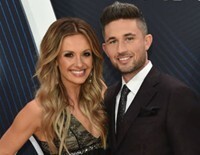 While ‘Closer To You’ continues to keep her name out there, Pearce says she’s still working on completing her second album. “There is no definite release date.” Although she didn’t write her current single, the longing couples share when they are apart in the lyrics hit close to home. Since last December Pearce has been engaged to fellow country singer Michael Ray, with both going in different directions out on tour.

“I can sympathize with people who are in long distance relationships. This song reflects my life right now.” Not only did she get engaged in 2018, but in the summer she earned CMT’s award for breakthrough video of the year for ‘Every Little Thing’. “The last two years have been pretty crazy for me.” Both Pearce and Ray were nominated in the new artist categories at the 54th annual ACM Awards, hosted by Reba McEntire live from Las Vegas’ MGM Grand Garden Arena on April 7 at 8 p.m. ET on CBS. The awards went to Ashley McBryde and Luke Combs respectively.

Charleston area country music fans will have an opportunity to see Pearce perform live when she opens for 2011 American Idol finalists Scotty McCreery and Lauren Alaina. McCreery won season 10 of the show. The trio along with Adam Hambrick will perform at the Hanahan Amphitheatre Thursday April 18th as part of a Spring Concert Series.

The media has begun to take notice of Carly Pearce. Newsweek, USA Today, Rolling Stone Magazine, and Billboard all agree she is one to watch. With tour dates with Jason Aldean to fill the remainder of the summer, it appears fans will get introduced to Carly Pearce in quick fashion. “That’s my goal. I do love playing live. Basically I just want to keeping moving forward.”