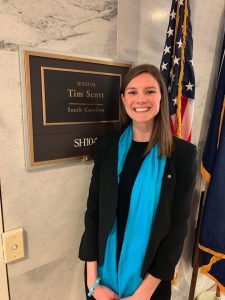 Mount Pleasant resident and lung cancer advocate Elaine Natoli traveled to Washington, D.C., this week to meet with her members of Congress to demand action. Through the American Lung Association’s LUNG FORCE initiative, Elaine stood alongside others personally affected by lung cancer to advocate for biomedical research funding and to ask Congress to protect affordable, adequate and accessible healthcare for people with pre-existing conditions, including lung cancer.

During Advocacy Day, Natoli met with the staff of Senator Tim Scott and representative Joe Cunningham to share her personal experience with lung cancer and explain why lung cancer research funding and healthcare protections for those with pre-existing conditions is important to her.

Elaine was just an eighth-grader when her father was diagnosed with stage 4 lung cancer in 2007. Her father’s tumors were inoperable, requiring chemotherapy and Gamma Knife Radiation. Her father battled the disease for five years and passed away in 2012.

“LUNG FORCE Advocacy Day was a great representation of not only how many lives are touched by lung cancer, but an important reminder that there is hope,” Natoli said. “It’s critical that we focus on finding new treatments and methods of early detection that can save lives. I hope Congress continues to pay attention to this disease and fund research at the National Institutes of Health.”

There will be are over 4,360 people in South Carolina diagnosed with lung cancer and 2,710 will succumb to the disease in 2019. It’s important to Elaine to share her story with lawmakers and others so that more can be done to help lung cancer patients and their caregivers throughout the United States and in South Carolina.

Elaine encourages others in Mount Pleasant and surrounding areas to advocate for lung cancer research and healthcare coverage for people with pre-existing conditions by contacting their members of Congress. Learn more about Elaine’s story and the LUNG FORCE initiative at LUNGFORCE.org.

Follow us
Related Topics:american lung associationElaine Natoli
Up Next