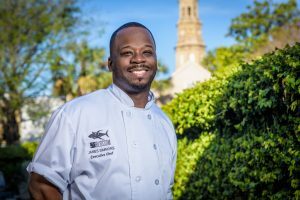 Hospitality Management Group, Inc (HMGI) and Blossom restaurant on Tuesday announced the recent appointment of James Simmons to executive chef.
“James has been with us since the late 90s and I’ve truly enjoyed watching his culinary talent develop over the years,” owner TJ Parsell said. “He’s been an integral part of the leadership team at Magnolias and I am excited to see what he has in store for us at Blossom.”
Simmons got his start in the culinary industry at theage of 16 when he joined the team at Magnolias in 1997. Under the influence of culinary arts director Don Drake and executive chef Kelly Franz, Simmons worked his way to shift leader in 2007 and sous chef in 2010.
Working with HMGI is a family affair for Simmons as his brothers Landice (sous chef) and Delon (kitchen manager) both work at Magnolias.
Reservations for Blossom can be found at https://blossomcharleston.com, on Resy, or by calling (843) 722-9200.

Follow us
Related Topics:blossomHospitality Management Group IncJames Simmons
Up Next