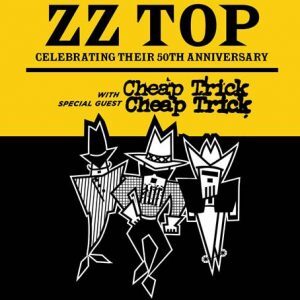 Rock & Roll Hall of Famers ZZ Top are celebrating their 50th year with a massive tour that will stop in the Charleston area on Wednesday, October 9th. Fellow Hall of Fame members Cheap Trick will also perform.

Cheap Trick first rose to prominence in the U.S. after the release of Cheap Trick at Budokan in 1979. That record propelled them towards a career that has included 20 million albums sold and a hall of fame induction in 2016. The band is best known for their hit songs “I Want You to Want Me” and “The Flame.”

Tickets go on sale to the general public on Friday, April 12th at 10 am. Click here for more info.
–