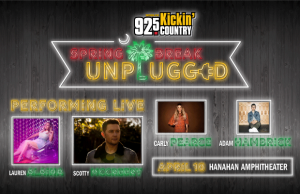 Tickets, including a VIP option, can be purchased here.

Eight years ago, McCreery edged out Alaina to win the 10th season of American Idol. Since then, McCreedy has tallied a platinum-selling album, multiple top 20 country songs, and became the only country music artist in Country Aircheck/Mediabase history to chart a song (“Five More Minutes”) without the backing of a record label.

After Idol, Alaina went on to notch two number one singles, including when she simultaneously topped five Billboard charts with “What Ifs,” her duet with Kane Brown.

Pearce is a Country singer that is likely best known for her debut single, “Every Little Thing,” which went to number one on the US Country Airplay chart.

Both McCreery and Pearce spoke to Holy City Sinner ahead of the local show. You can see each interview here: