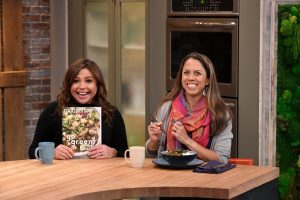 AMOR Healing Kitchen today announced it recently won the Feed it Forward Contest through Rachael Ray’s Yum-O! Foundation and will appear on television this week. The mission of Ray’s foundation is to empower children and families to develop healthy relationships with food and cooking through three main initiatives: Cook, Feed, and Fund.

AMOR was awarded $5,000, an article in the April issue of the Rachael Ray Magazine, a trip to NYC to tour the magazine, and a brief appearance on the Rachael Ray Show (airing at noon on Friday, April 12th on WCIV ABC News 4).

“Winning this contest is very validating for us,” Maria Kelly, the Founder & Executive Director of AMOR, said. “We are a young grassroots nonprofit, and to receive this recognition from the Rachael Ray Everyday Magazine and the Rachael Ray Show is a testament to the work that we’ve been doing over the past year in our community and the potential that we have to grow as an organization.”

AMOR Healing Kitchen prepares and delivers organic and wholesome meals for those facing serious health challenges. Their team consists of teen chef volunteers, adult kitchen mentors, and “Delivery Angels.” The organization was founded in February 2018 by a former Lowcountry high school teacher, Maria Kelly, with hopes of shaping the present and future community through food and service.

Watch the First Trailer for “Emanuel,” a Documentary About the 2015 Charleston Church Shooting