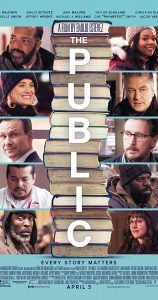 On Friday, April 12th, the Library Foundation of the Lowcountry and the Charleston Friends of the Library will host a screening of The Public, a film about the challenges faced by libraries, city governments, and social service agencies particularly with regard to the homeless. The event, which is part of National Library Week, will be held at the Terrace Theater starting at 7 pm. A short panel discussion will follow the movie.

The Public was directed and written by Emilio Estevez, who also stars in the film alongside Alec Baldwin, Christian Slater, Gabrielle Union, Taylor Schilling, Michael Kenneth Williams, Jeffrey Wright, and more. Click here for more information on the screening.

The Terrace Theater is located at 1956 Maybank Highway.

Follow us
Related Topics:Charleston Friends of the LibraryLibrary Foundation of the LowcountryNational Library Week
Up Next