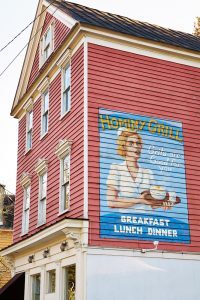 After over two decades of serving the Charleston community, Hominy Grill, perhaps the peninsula’s most famous restaurant, is closing. The Post & Courier today reported that the restaurant will close on Saturday, April 28th.

Hominy Grill, which opened in 1996 and is probably best known for its shrimp and grits, tomato pie, and the Charleston Nasty Biscuit (formerly known as the Big Nasty), is located at 207 Rutledge Ave.
–

Stehling’s work with Hominy Grill earned him a James Beard Award in 2008 for Best Chef Southeast.

The restaurant has been featured on numerous television shows including No Reservations with Anthony Bourdain, The Best Thing I Ever Ate, Man v. Food, and Amazing Eats.

Hominy Grill is open daily from 7:30 am to 3 pm, so plan accordingly!