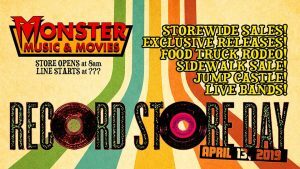 The store will also have the Charleston Animal Society on site conducting an adoption clinic. Although RSD starts at 8 am, many customers line up outside before then, so Monster will have Bottleneck Coffee on site distributing free coffee for the first 100 people in line.

“Historically, record stores have been a place of discovery that’s been immensely important for music consumers, connoisseurs, and musicians themselves,” Monster general manager Galen Hudson said. “A lot of bands you love met each other in record stores. A lot of married couples we know did too. With the digital age, a lot of that has been lost, and this is an opportunity to take some of that back, reclaim what was once yours and ours alike.”

The live music schedule is as follows:

Food trucks expected to be at the store include:

New this RSD is the Crosley RSD3, a mini-turntable that plays 3” records. Epitaph Records and Third Man Records have created a set of four “blind box” 3” records that play only on these turntables. The songs contained are roughly three minutes.  All the records are packaged the same, so you don’t know which record you’re getting.

The Third Man set includes songs by White Stripes, Jack White, Raconteurs, and Dead Weather. The Epitaph set includes Bad Religion, Rancid, Culture Abuse, and the Interrupters. Future 3” records are planned. Demand for these turntables has been heavier than expected, with Crosley selling out within a day of being announced.

Record Store Day has been instrumental in fueling the vinyl resurgence of the last decade. While digital and streaming services receive the most publicity, vinyl record sales has grown to 16.8 million units sold in 2018 – nearly half of which came from indie stores that typically face more challenges in the retail space than chain stores.

Monster Music is located at 946 Orleans Road in West Ashley.  Record Store Day begins at 8 am.

Follow us
Related Topics:monster musicnational record store day
Up Next

The Ponds in Summerville Hosting Several Events this Month

Taste of Hutson Alley Returns on May 9th