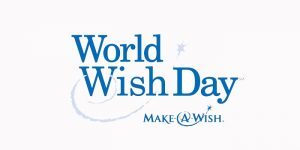 Make-A-Wish® South Carolina will celebrate World Wish Day® on April 29th, the 39th anniversary of the wish for then 7-year-old Chris Greicius that inspired the founding of the organization. World Wish Day celebrates the hundreds of thousands of life-changing wishes that have been granted – and the thousands of wishes still to come. In preparation for the milestone day, Make-A-Wish South Carolina is joining forces with other Make-A-Wish chapters and affiliates worldwide for a month-long World Wish Day campaign with the theme: “Where there’s a wish, there’s a way.”

Throughout April, Make-A-Wish South Carolina will focus on telling the stories of wish alumni – young and old – whose wishes gave them the strength to fight their illness and transform their lives. Alumni like Amaya Gunasekera from Greenville whose wish to go to San Francisco was granted in 2004 when she was being treated for a rare autoimmune disease. Amaya is now 30-years-old and holds a master degree in speech language pathology from University of South Carolina.

By showcasing alumni like Amaya, Make-A-Wish South Carolina shows that a wish is not necessarily a last wish, but rather, an important part of a child’s medical treatment and healing.

“Children who receive a wish replace fear with confidence, sadness with joy, and anxiety with hope – a powerful combination that helps wish kids look beyond the challenges of today toward the possibilities of tomorrow,” Crystal Alifanow, Make-A-Wish South Carolina Director of Communications, said. “More often than not, the wish can help give kids the strength to fight, to get better – to grow up.”

Wish alumni stories will be on full display in a brand-new campaign that was developed in partnership with TBWA\Chiat\Day LA to showcase the long-lasting, life-changing benefits of a wish come true. A PSA stars Make-A-Wish kids and alumni whose wishes to be an astronaut, dinosaur, mermaid, football player, cowgirl and firefighter served as a catalyst for hope and healing. The PSA premiered Wednesday, April 3rd, and can be watched below.

In addition, Make-A-Wish South Carolina will turn every Wednesday in April into #WishWednesday by sharing inspirational stories of wish kids and alumni through the Make-A-Wish social media platforms. The chapter will also celebrate with volunteers and wish families in Columbia at The Nickelodeon on April 27, 2019 where the chapter will kick off the year-long celebration of its 35th anniversary.

World Wish Day illustrates the imperative role a wish plays in a child’s medical treatment by helping kids build the physical and emotional strength they need to fight a critical illness.