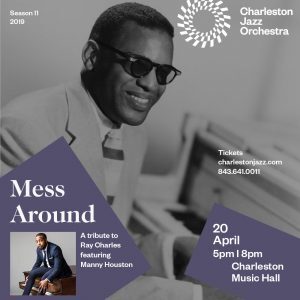 South Carolina native and College of Charleston grad, Manny Houston, joins the Charleston Jazz Orchestra (CJO) on April 20th to pay tribute to Ray Charles. Known as the ‘Genius of Soul,’ Ray pioneered the soul music genre during the 1950s and 60s by combining blues, jazz and gospel styles.

The CJO welcomes vocalist Manny Houston to celebrate this American icon. Originally from Greenville, SC, Manny has starred in many stage and show productions, including his own highly acclaimed piano singer tribute at the Charleston Music Hall.

“I’m looking forward to working with Manny on this show,” Robert Lewis, Music Director of the Charleston Jazz Orchestra said. “He was one of our students in the College of Charleston music department, it’s great to see his professional career blossoming!”

The Party at the Point happy hour concert series is back for its 20th season, taking place Friday evenings from...