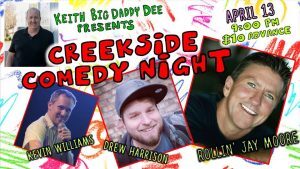 Here’s a look at the headliner:

Celebrate National Library Week with the Friends of the Library