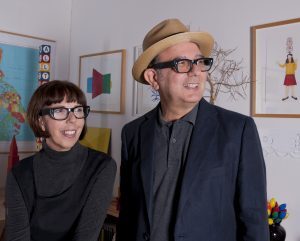 Two internationally recognized artists will discuss how public art transforms civic spaces and communities at a public lecture on April 18th. “The Role of Public Art in Thriving Communities” runs from 6 pm to 8 pm at the West Ashley Theatre Center.

Guest speakers are Roberto Behar and Rosario Marquardt, Miami-based founding partners of R & R Studios. They will share their approach to public art and public architecture and its relationship to civic space and the community. Their work weaves together visual arts, architecture, design and the city and produces “a public architecture that emphasizes the communal and civic dimension of life.”

Behar and Marquardt – who have known each other since childhood – weave together visual arts, architecture, landscape and the city. They have been recognized with multiple awards and featured in more than 350 publications worldwide. Their work has been exhibited internationally in solo and group museum shows, and is in the permanent collections of the Museum of Modern Art in Buenos Aires, the Archives d’Architecture Moderne in Brussels, the Perez Art Museum Miami, and Madison MOCA.

Rosario and Roberto are known for creating social sculptures for public pleasure, including works in Denver, Miami, Mexico and Copenhagen. They are currently completing landmarks and public squares in Seattle, Phoenix, Coral Gables and Puerto Rico.

The Charleston Parks Conservancy launched its Art in the Parks program in 2017, an effort to install temporary public art displays in Charleston city parks through collaborations with artists and arts organizations, including Redux Contemporary Art Center, City of Charleston Office of Cultural Affairs and ArtFields. The first art installation was in Hampton Park last year with another one planned for the spring on the West Ashley Greenway.

In 2017, the Conservancy received a $50,000 grant from the National Endowment for the Arts for a project that would add public art activities along the West Ashley Greenway and Bikeway. Temporary public art and arts programming will be incorporated into the master plan.

“We recognize how vital public art programs are to a community. It’s why we are looking at how to add more art to our city parks,” said Harry Lesesne, executive director of the Charleston Parks Conservancy. “We look forward to inviting the community to hear from true experts in this area and learn more about how our city can benefit from the addition of social sculpture and public art.”

“The Role of Public Art in Thriving Communities” lecture is free and open to public, but registration is required. Registration does not guarantee admission as seating is limited and available on a first come, first served basis.