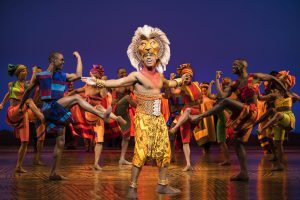 The Lion King, the world’s #1 musical, will make its Lowcountry premiere December 4th through 15th as the anchor show of the 2019-2020 Best of Broadway season at the North Charleston Performing Arts Center. The show will offer sixteen performances over those two weeks.

The Best of Broadway series will also feature two special shows this season including Rent (October 15 & 16, 2019) and The Simon and Garfunkel Story (November 1, 2019). As with the Best of Broadway season shows, season ticket holders will have priority access to seats before they go on sale to the general public.

Another exciting development for the 2019-2020 season is the move to weekends. In years past, non-weeklong shows historically played Tuesdays and Wednesdays. Starting next season, the shows move to Friday to Sunday.

“This is the greatest season in the history of the Best of Broadway,” Frank Lapsley, General Manager of the North Charleston Performing Arts Center, said. “Our fans have been asking for The Lion King for years and we are thrilled to be able to bring the show to North Charleston. In addition, we are expanding our season to the weekends. This will allow more families to come out and enjoy the Best of Broadway”.

Current season ticket holders can renew their tickets now. Season tickets go on sale to the general public on May 7th at 10 am. Season ticket packages start at $218. Tickets are available at the Coliseum Advance Ticket Office, by calling (843) 202-ARTS (2787) or online at www.NorthCharlestonColiseumPAC.com. Individual show tickets will go on sale at a later date.

In addition to having the same seat for all performances, Best of Broadway season ticket holders enjoy many other benefits such as free parking, priority access to tickets for North Charleston Coliseum & Performing Arts Center events before they go on public sale, and special discounts & offers.

Giraffes strut.  Birds swoop.  Gazelles leap.  The entire Serengeti comes to life as never before.  And as the music soars, Pride Rock slowly emerges from the mist. This is Disney’s THE LION KING, making its triumphant premiere at the North Charleston Performing Arts Center.

More than 95 million people around the world have experienced the awe-inspiring visual artistry, the unforgettable music, and the uniquely theatrical storytelling of this Broadway spectacular – one of the most breathtaking and beloved productions ever to grace the stage.

There is simply nothing else like THE LION KING.

Meet Jenna, a waitress and expert pie-maker who dreams of a way out of her small town and rocky marriage. Pouring her heart into her pies, she crafts desserts that mirror her topsy-turvy life such as “​The Key (Lime) to Happiness Pie” and “Betrayed By My Eggs Pie.” When a baking contest in a nearby county — and a satisfying run-in with someone new — show Jenna a chance at a fresh start, she must find the courage to seize it. Change is on the menu, as long as Jenna can write her own perfectly personal recipe for happiness.

“​WAITRESS​ is a little slice of heaven!” says Entertainment Weekly, and is “sweet, sassy and passionate,” according to New York Magazine. Don’t miss this uplifting and hilarious musical!

THE COLOR PURPLE is the 2016 Tony Award® winner for Best Musical Revival! Hailed as “a direct hit to the heart” (The Hollywood Reporter), this joyous American classic has conquered Broadway in an all-new “ravishingly reconceived production that is a glory to behold” (The New York Times).

With a soul-raising, Grammy®-winning score of jazz, gospel, ragtime and blues, THE COLOR PURPLE gives an exhilarating new spirit to this Pulitzer Prize-winning story.

Don’t miss this stunning re-imagining of an epic story about a young woman’s journey to love and triumph in the American South. Experience the exhilarating power of this Tony-winning triumph that New York Magazine calls “one of the greatest revivals ever.”

CATS, the record-breaking musical spectacular by Andrew Lloyd Webber that has captivated audiences in over 30 countries and 15 languages, is now on tour across North America!

Audiences and critics alike are rediscovering this beloved musical with breathtaking music, including one of the most treasured songs in musical theater—”Memory”. Winner of 7 Tony Awards® including BEST MUSICAL, CATS tells the story of one magical night when an extraordinary tribe of cats gathers for its annual ball to rejoice and decide which cat will be reborn. The original score by Andrew Lloyd Webber (The Phantom of the Opera, School of Rock, Sunset Boulevard), original scenic and costume design by John Napier (Les Misérables), all-new lighting design by Natasha Katz (Aladdin), all-new sound design by Mick Potter, new choreography by Andy Blankenbuehler (Hamilton) based on the original choreography by Gillian Lynne (Phantom) and direction by Trevor Nunn (Les Misérables) make this production a new CATS for a new generation!

A BRONX TALE, Broadway’s hit crowd-pleaser, takes you to the stoops of the Bronx in the 1960s, where a young man is caught between the father he loves and the mob boss he’d love to be.

Bursting with high-energy dance numbers and original doo-wop tunes from Academy Award® and Tony® Award-winner Alan Menken (Beauty and the Beast) and Tony® Award-nominee Glenn Slater (Love Never Dies), A BRONX TALE is an unforgettable story of loyalty and family.

The New York Times hails A BRONX TALE as “A Critics’ Pick! The kind of tale that makes you laugh and cry.”

Celebrate National Library Week with the Friends of the Library