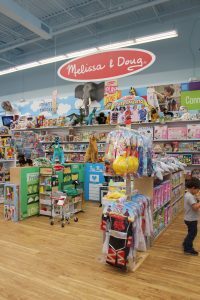 In today’s world of over-scheduled and over-stimulated children, international toy manufacturer Melissa & Doug is on a mission to Take Back Childhood with toys that allow children the freedom to imagine, explore, and think.  With a recent report from American Academy of Pediatrics pointing to a “play deficit” amongst developing children, Melissa & Doug has come up with a “prescription for play” by providing toys that nourish creativity, emotional and social interactions, and problem solving through hands-on play.

Experiential play is not only important to childhood development, it is a traffic-driver, crucial to the success of brick and mortar stores in the changing retail climate. With recent findings from the AAP, parents are trending away from digital media-based toys. By offering interactive, tech-free play zones from Melissa & Doug, stores will now be able to provide their customers with a platform to experience the wonder of hands-on play.

“Melissa & Doug has knocked it out of the park,” said Wonder Works owner Christine Osborne. “They are making a difference not only in the lives of children, but of specialty toy retailers across the nation.” With a dedicated team of professional designers, the toy manufacturer is the first to make truly immersive play zones accessible to local retailers like Wonder Works and Awesome Toys in Connecticut, owned by Nick Tarzia.

Osborne and Melissa Bernstein, co-founder of Melissa & Doug, have considered themselves “partners in play” for over two decades. “Wonder Works epitomizes everything a specialty toy store should be—seeking to delight and inspire children with hands-on, open-ended play,” said Bernstein. “Melissa & Doug is honored to partner with them to bring experiential play to life in their stores and provide a launchpad for children to ignite their imagination and a sense of wonder so they can discover themselves, their purpose, and their passions!”

“By experiencing the magic of hands-on play at Wonder Works, children in our community are not only exploring the world around them, they’re making memories that will last a lifetime,” Osborne added.