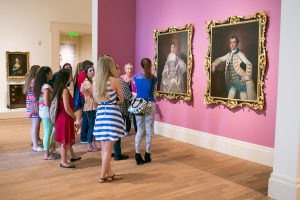 For the entire month of April, the Gibbes Museum of Art will offer reduced admission of $12 for adults and $10 for seniors.


“The reduced admission is the perfect opportunity for visitors to come and experience the Gibbes especially if you haven’t had the chance to see what all we have to offer,” Angela Mack, the Gibbes Museum of Art’s executive director, said. “The Gibbes is truly a one-stop shop for the quintessential Charleston art, culture, history, food and artist experiences.”

The museum features 10,000 objects in the permanent collection including, a display of intricate sweetgrass baskets by Mary Jackson, a neoclassical sculpture gallery set in the beautiful Campbell Rotunda, a whimsical installation made from twigs and branches by Patrick Dougherty and many other inspiring works. Also, enjoy special exhibitions on display in April including:

A favorite among American sporting art collectors, Ogden Pleissner had a gift for capturing fleeting moments of time—the tug on a fishing line or the pregnant pause as a hunter sets his sights. Beginning in January, The Gibbes will display 48 paintings depicting scenes from Wyoming to Maine to the South Carolina Lowcountry created during Pleissner’s illustrious career that spanned from the late 1920s until his death in 1983.

A native of Columbia, South Carolina, Anna Heyward Taylor is best known as one of the principal artists of the Charleston Renaissance, but her early travels often took her to exotic locations. Brought together for the first time, this exhibition showcases Taylor’s watercolors, batiks and woodblock prints inspired by her adventurous expeditions in British Guiana as a staff artist for renowned American naturalist William Beebe in the early decades of the twentieth century.

Featuring a selection of works by African American artists acquired by the Gibbes for its permanent collection over the last ten years, this exhibition reflects on the Gibbes collecting efforts since the opening of Prop Master: An Installation by Juan Logan and Susan Harbage Page in 2009. Since the close of the Prop Master exhibition nearly ten years ago, the Gibbes has added 28 new works by African American artists, including David Driskell, Sam Doyle, Leo Twiggs, Kara Walker and Mary Jackson.

To learn more about the Gibbes, visit www.gibbesmuseum.org.