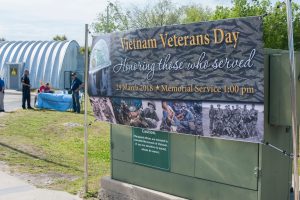 At 1 pm on Friday, March 29th, the museum will host a ceremony to dedicate their CH-46 helicopter in memory of two men who were killed in a crash during the evacuation of Saigon. The pilot and co-pilot of aircraft YT-14, Capt. William C. Nystul and 1st Lt. Michael Shea, were attempting to land on the USS Hancock on April 29, 1975, when their helicopter crashed into the Pacific Ocean. The incident was the last Marine helicopter crash of the war. The aircraft’s crew chief and gunner both survived.

Following the aircraft dedication, Patriots Point will host a memorial ceremony to honor the 896 South Carolinians who were killed in the Vietnam War. 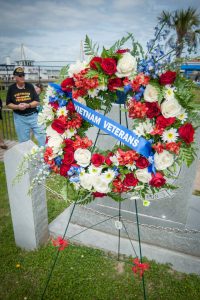 “We take great pride in being a partner of the Department of Defense’s Vietnam War 50th Anniversary Commemoration,” Patriots Point Naval & Maritime Museum Executive Director Mac Burdette, said. “Every Vietnam veteran who comes through our gates will be welcomed home and offered a commemorative pin by our staff and volunteers. It is important that we continue to honor the brave men and women who sacrificed so much during this war.  Many still fight the war internally, today.”

Patriots Point will also open a new Vietnam War Special Forces Exhibit on Vietnam Veterans Day. The exhibit will explain how Green Berets in the U.S. Army’s Special Forces unit relied on oppressed tribe people known as Montagnards to help fight the North Vietnamese Army and the Viet Cong. More than 60,000 Montagnards were taught to use modern weapons and warfare techniques. The exhibit is located inside the Vietnam Experience at Patriots Point.

Parking on March 29th will cost $5. Free admission for Vietnam veterans and their immediate families is made possible by the SunTrust Foundation.

The Gibbes Museum of Art to Offer Reduced Admission this April