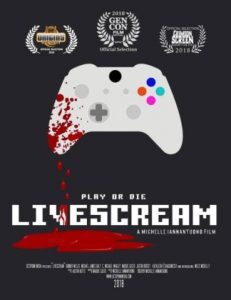 An award-winning independent movie by a local filmmaker will be screened this week in Summerville. Michelle Iannantuono’s Livescream can be seen at 7:30 pm on Thursday, March 28th at the Regal Azalea Square Stadium 16.
Here’s an synopsis of the film: “Every day, over 200 loving fans watch Scott Atkinson play horror games online. After a lifetime of failures and false starts, streaming games is the only thing he’s good at. It’s the thing he loves the most….Until it becomes a nightmare. Enter Livescream – a mysterious horror game sent to him by an anonymous fan. At first, he thinks the game is a low quality indie title, but when his followers start dying one by one, he soon realizes the game is far more sinister.”
Tickets for the Summerville screening can be purchased in advance here or at the door. The movie is not rated, but parental guidance is suggested because of strong language.
You can watch a trailer for the film below: