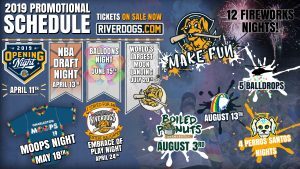 The Charleston RiverDogs today announced their 2019 promotional schedule. Beginning with Opening Night on April 11, the RiverDogs calendar promises to “Make Fun” all season long at The Joe.

With headliners that include NBA Draft Night (April 13), the World’s Largest Moon Landing (July 20) and Moops Night (May 18), promo fanatics will have no shortage of games to circle on their calendar of 70 jam-packed evenings at The Joe this year. The promotional lineup will also feature several returning favorites, including Boiled Peanuts Night (August 3) and Rainbows Night (August 14), both complete with specialty on-field jerseys. With fireworks, giveaways and more, there’s something for everyone in 2019.

NBA Draft Night (April 13): The RiverDogs provide the platform to make one of their fans the next breakout star in “The Association.” All eligible fans in attendance can declare for the upcoming NBA Draft in line with league rules (19 and older) and have a chance to hit a $1,000 half-court shot. The RiverDogs will wear specialty jerseys that are the first of their kind; in the spirit of draft day style, the inside of each “suit” is lined with even more RiverDogs pride.

Embrace of Play Night (April 24): Everyone’s trying to speed up the game, but why rush a good thing? Fans will be encouraged to nurse a beer on “Embrace of Play” Night. Pick daisies in the outfield between innings, enjoy slow-cooker food specials, and see which will end first: the baseball game or a game of Monopoly. All clocks will be banned from The Joe for the evening and fans in attendance for the final out will receive a commemorative button proudly stating, “I stayed for an entire baseball game.”

The First Rule of this Promo Night is That You Don’t Talk About This Promo Night (May 9): Rules are rules. (But as part of the 20th anniversary celebration, the first 1,000 fans will receive a bar of soap that smells like a baseball glove).

C-Night (May 14): Baseball is a game of averages so the RiverDogs will invite their fans to an average night at the yard. Kids who bring in a “C” on their report card get in free and the RiverDogs will wear their alternate Charleston C jerseys. Enjoy “C” food specials and meet a C-List celebrity on a night that promises to be perfectly mediocre.

Moops Night (May 18): The RiverDogs take the field as the Charleston Moops, as they pay homage to one of the most famous Seinfeld references. In celebration of the 40th anniversary of Trivial Pursuit, the Dogs will host an evening of trivial diversion complete with photo opportunities with the Moops, trivia about other famous misspellings, and more. The first 1,000 fans through the gate will receive a replica trivia card and in the words of George Constanza, “I’m sorry, the card says Moops.”

Balloons Night (June 15): In honor of 10 years of the movie Up, the RiverDogs will entertain with a night full of balloons. Everyone in the park will receive a balloon to participate in the stadium-wide launch, plus a gender reveal, balloon games and more. It’s going to be a colorful night at the Joe.

Helen McGuckin Night (July 9): In May 2018, the RiverDogs received the following Google Review: “Just drove by, 2 out of 5 stars.” The author, Helen McGuckin, is a Level 7 local guide on Google. The Charleston club has worked tirelessly since then to track down Helen in the hopes of a second chance. Helen, we hope this message reaches you and we promise an unforgettable night at the ballpark that we hope ends with a new review: “5/5 would do again.”

World’s Largest Moon Landing (July 20):  A moon celebration unlike any other in Minor League Baseball starts when the first 1,000 fans receive a RiverDogs souvenir moon shirt. Moon trivia, moonwalking and Moon Pies all lead up to the end of the seventh-inning stretch, when all fans in the ballpark will simultaneously “land on their moon,” creating the world’s largest moon landing. PLUS, in honor of the original moon landing, if the game lasts shorter than Neil Armstrong’s 2 hours, 31 minutes and 40 seconds on the moon, every fan will go home with a voucher for another RiverDogs game.

Boiled Peanuts Night (August 3): Back by popular demand, the RiverDogs dip into a steamy pot of Charleston tradition as they transform in the “Charleston Boiled Peanuts” for a night. The Boiled Peanuts will celebrate the second annual event with one-night rebrand, including a host of new nutty merchandise on-sale at the ballpark and leading up to the event online. The first 1,000 fans through the gate will also receive their very own Boiled Peanuts bow tie in honor of Tony the Peanut Man, paying homage to the longtime ballpark vendor, who in part inspired the club’s temporary moniker and logo that debuted in 2018.

Rainbows Pride Night (August 14) presented by MUSC Health: The RiverDogs turn back the clock to the days when names like Hall of Famer Roberto Alomar, Sandy Alomar, and Carlos Baerga roved the infield of College Park. The RiverDogs will become the Charleston Rainbows again, complete with Rainbows uniforms, for one night only in conjunction with Charleston Pride, who will receive the proceeds of the jerseys auctioned off during the game.

Copa de la Diversión presented by MUSC Health (June 8-9, July 11, August 6): As part of Minor League Baseball’s “Copa de la Diversión,” the RiverDogs will also take the field as los Perros Santos for four games during the season in conjunction with MUSC Health as they celebrate Charleston’s flourishing LatinX population. More information and family four pack tickets for the Copa celebration can be found at riverdogs.com/PerrosSantos.

Larry Doby Heritage Weekend presented by MUSC Health (June 29-30): The RiverDogs celebrate the legacy of the first player to break the color barrier in the American League during a two-day celebration. The RiverDogs will provide tickets to underrepresented youth sports groups in the area and honor the 1955 Cannon Street All-Stars, the first black Little League in the state of South Carolina, barred from participating in the Little League World Series. Per tradition, the RiverDogs will also don the uniforms of the Newark Eagles, the Negro League club where Doby spent five seasons, during Sunday’s contest.

Boeing Military Appreciation Nights (May 25, July 1, August 2): The RiverDogs are proud to partner with The Boeing Company to celebrate troops and veterans throughout three special military nights during the 2019 season. Visit riverdogs.com/military to find out about complementary military tickets and more information about the nights.

Specialty Start Times: RiverDogs fans should take note of specialty start times during the 2019 season, including their pair of Education Day games for Lowcountry schools (April 17, May 28, 11:05 a.m.) and Big Splash Day (July 10, 12:05 p.m.), turning The Joe into one big water park available to summer camps and youth groups. The RiverDogs will also host special start times for an early evening Memorial Day (May 27, 5:05 p.m.) contest, a Father’s Day matinee (June 16, 1:05 p.m.), and their home Labor Day Finale (September 2, 2:05 p.m.). Charleston will also throw the first pitch at 6:35 p.m. for their Independence Day Spectacular (July 3) with postgame fireworks to follow.

Popular weekly promos including Monday Dog Days, featuring dollar beers and hot dogs presented by Busch Light, return with eight chances to bring your dog out the ballpark this year. The Joe will open its gates for 11 Budweiser Thirsty Thursdays with dollar brews in the Ashley View Pub this season.

Boeing Red Shirt Fridays with Friday Fireworks presented by Home Telecom will each feature their own musical theme for 11 dates in 2019. In conjunction with Boeing, every Friday will also shine a spotlight on active duty and retired military members and their families while the RiverDogs sport their red alternates on the field.

Saturdays Live at The Joe feature a host of postgame activities and shows, including five helicopter ball drops with a chance to win prizes, a postgame basketball shootaround, a 1,000 postgame t-shirt toss, and more.

Live & Local Tuesdays presented by Food Lion are back for a second season, showcasing local produce with a farmers market on the concourse and a different local musical artist for nine games in 2019. The RiverDogs will also offer their all-new RiverDogs-branded beer brewed in conjunction with Rusty Bull, to be debuted before the season. Fans can enjoy the all-new summer staple as part of Live & Local Tuesdays down at The Joe.

MUSC Health Family Sundays in the Holy City will see the Dogs once again don their pinstripe alternates paying homage to the City of Charleston’s “Holy City” moniker. Members of the MUSC Children’s Health Kids Club (ages 12 and under) get in free, eat free, and run the bases postgame while families can enjoy free parking and pregame catch on the field for all 11 Sunday games.

On the heels of their second straight year eclipsing 300,000 fans through the turnstiles, the RiverDogs are preparing to “Make Fun” all season long in another year down at The Joe. Some say it’s good; girls just want to have it, but where does fun come from? The RiverDogs believe that they can create a better, happier, more joyful community by helping people to “Make Fun.” Single-game tickets, including options to the Riley Park Club, are now available for the 2019 campaign at riverdogs.com/tickets or by contacting the RiverDogs front office at 843-577-3647 (DOGS). The RiverDogs begin their home schedule on April 11 when they host the Greensboro Grasshoppers at The Joe, preceded by a weeklong road trip. A full schedule and list of game times for the 2019 season is available at riverdogs.com.