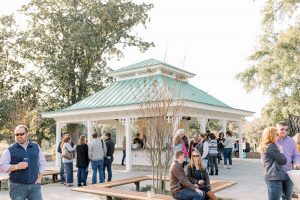 The newly renovated Rose Pavilion at Hampton Park is officially open to the community. Mayor John Tecklenburg joined representatives from the Charleston Parks Conservancy, The Speedwell Foundation, the City of Charleston and the surrounding community for a ceremonial rose planting to mark the Pavilion’s dedication on Tuesday, March 19.

The Conservancy, with the support of The Speedwell Foundation and in collaboration with the City of Charleston, refurbished the previously shuttered concession stand at Hampton Park. The structure and surrounding area has been transformed into the Rose Pavilion, a stunning public gathering space and garden. Rose Pavilion will be a place for community gatherings and a central location for new park programs and community events, such as culinary pop-ups, neighborhood gatherings and cultural events.

A contribution from The Speedwell Foundation to the Conservancy made the project possible. Jenny Messner, a director of the Foundation, said “Hampton Park is a Frederick Law Olmsted treasure that my husband and I were delighted to discover in our new hometown, when we moved here seven years ago. We had just completed a documentary film of Olmsted’s life called ‘Olmsted and America’s Urban Parks’ that aired on Earth Day 2011. The Rose Pavilion is a tribute to Olmsted’s impact on our landscapes and the starting point for an exciting project to bring Hampton Park back into the glorious limelight it deserves.”

“Thanks to The Speedwell Foundation, we’re achieving our goal to enliven and improve the experience at Hampton Park,” said Harry Lesesne, executive director of the Charleston Parks Conservancy. “We know the community will love admiring the heirloom rose garden, relaxing on the Pavilion’s joggling boards and benches, or attending an event here. A project like this is central to our mission of creating beautiful public spaces that inspire people to connect with their parks.”

Mayor John Tecklenburg said, “The decade-long partnership that the City’s Parks and Recreation Departments have developed with the Charleston Parks Conservancy continues to blossom.  We’re proud of the more than 20 public spaces that have been transformed, maintained and energized by the Conservancy team working alongside our very fine City staff. We also give our deepest thanks to Jenny and Mike Messner of The Speedwell Foundation for their support of the Rose Pavilion at Hampton Park and so many other worthwhile ventures making a difference in the lives of citizens all over Charleston.”

The Conservancy, with the support of its Park Angel volunteers, planted more than 200 heirloom roses. The rose planting is significant as we celebrate two centuries of Charleston’s place in rose history. The Noisette rose class is one of the most significant creations then and now. Citizens who are interested in joining the Conservancy’s Park Angel volunteer corps to help maintain the garden are invited to go to www.charlestonparksconservancy.org/volunteer for more information.

The Rose Pavilion facility is available to rent for events up to four hours. Rentals will be managed by Lowcountry Park Venues, which manages event rentals in other parks in the region. Rental includes pavilion access with a prep counter and four serving counters as well as access to the surrounding park, gardens and hardscape, which has joggling boards and built-in benches. The space is ideal for up to 150 guests.

For residents of the City of Charleston, the rental rates are $550 Sunday-Thursday, and $675 on Saturday and Sunday. For those from outside of the City, rates are $800 Sunday to Thursday and $1,000 for Friday and Saturday. For more information on renting the Rose Pavilion, call 843-849-8091.

When not being used for an event, the Pavilion is open to the public.

Proceeds from renting the Rose Pavilion will help the Charleston Parks Conservancy sustain additional projects in Hampton Park and in parks throughout the City of Charleston. The Conservancy previously renovated McMahon Playground at Hampton Park as well as the nearby Allan Park and Corrine Jones Park. The next phase of its Hampton Park project is Jubilee Hall, multi-use community center with small meeting rooms, community event space, outdoors gardens and a dedicated parking lot.

Rose Pavilion is named for the heirloom rose collection in Hampton Park and for a notable contribution to the world of horticulture that originated in Charleston. In the early 1800s, Charlestonian John Champneys crossed Rosa chinensis (Old Blush) and Rosa moschata, a white musk rose, to create Champneys’ Pink Cluster, America’s first hybrid rose. His friend and neighbor,  French botanist Philippe Noisette, created a more refined hybrid of the Pink Cluster, calling it the Blush Noisette and establishing an iconic flower for the gardens of Charleston. These roses are featured in Hampton Park and at the new garden at the Rose Pavilion.

Over the last decade, the Conservancy has been dedicated to inspiring the people of Charleston to connect with their parks and together create stunning public spaces and a strong community. It has spearheaded park renovation and beautification projects all around the city, including Colonial Lake, Tiedemann Park and Nature Center, Chapel Street Fountain Park, Cannon Park, Wragg Square, McMahon Playground at Hampton Park, Allan Park, Magnolia Park and Community Garden, Medway Park and Community Garden, the West Ashley Greenway and Bikeway, and many more.

About the Charleston Parks Conservancy

Follow us
Related Topics:Charleston Parks Conservancyhampton parkRose Pavilion
Up Next