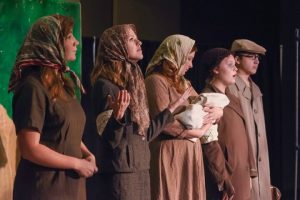 On Thursday, May 2nd at 7 pm, Patriots Point Naval & Maritime Museum will offer a free showing of “Life in a Jar,” a play about the life of Irena Sendler, a Polish woman credited with saving more than 2,500 children from Nazi death camps during World War II. The play will be performed aboard the historic WWII aircraft carrier USS Yorktown (CV-10).

The performance of “Life in a Jar” was made possible in part by a grant from the South Carolina Council on the Holocaust, and support from the USS Yorktown Foundation. Patriots Point Naval & Maritime Museum has partnered with the Charleston Jewish Federation and the Charleston County Public Library to support Holocaust remembrance and education programs throughout the spring.

Seating for the performance will begin at 6 pm and guests are highly encouraged to arrive early and be seated no later than 6:45 pm.

A limited amount of tickets are available to reserve on www.patriotspoint.org or by calling 843-884-2727 Monday-Friday from 8 a.m. to 4 p.m.

About “Life in a Jar”

In the fall of 1999, a teacher in rural Kansas encouraged three students to work on a year-long National History Day project that would extend the boundaries of the classroom to families in the community, contribute to history learning, and teach respect and tolerance. The students conducted research about Irena Sendler, a non- Jewish social worker, who went into the Warsaw Ghetto, convinced Jewish parents and grandparents to part with their children, and then found Polish families to adopt them so that they could avoid Nazi death camps.

Sendler and her network made lists of the children’s real names and buried them in jars so that she could inform the children of their real identities once the war had ended.

After learning about Irena Sendler’s story, the Kansas students wrote a play (Life in a Jar) in which they portrayed her life. The play has been performed nearly 400 times throughout the past 20 years in communities all across the United States.

Visit www.irenasendler.org for more information about Irena Sendler and the “Life in a Jar” play.