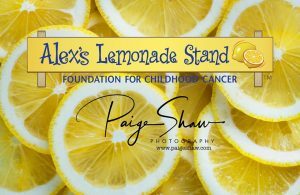 Paige Shaw, a Charleston resident and travel photographer, will run a charity lemonade stand in Marion Square on Saturday, June 8th. Proceeds will go to Alex’s Lemonade Stand Foundation (ALSF), an organization that aims to “change the lives of children with cancer through funding impactful research, raising awareness, supporting families, and empowering everyone to help cure childhood cancer.”

ALSF has several supporters like Shaw who hold fundraisers throughout the year, but the organization hosts their annual “Lemonade Days” during the first nine days of June. The national fundraiser will include thousands of supporters around the country hosting lemonade stands or events to raise money for childhood cancer research.
Shaw, who donates all of her photography proceeds to ALSF, was moved to support the organization after her son had two different cancers as a child. If you can’t make it to the stand in June, you can donate online.
–

ALSF started with one lemonade stand, hosted by founder Alexandra “Alex” Scott in her front yard which raised $2,000. Alex was just 4 years old and battling neuroblastoma when she asked to give the money so doctors can find cures for all children battling cancer.

Follow us
Related Topics:Alex's Lemonade Stand Foundationmarion square
Up Next

Coming in May: “Behind the Lines: A Musical Tribute to America’s Heroes”