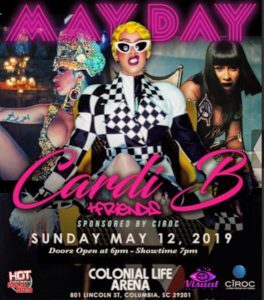 Recent Grammy-Award winner Cardi B will perform at Columbia’s Colonial Life Arena on Sunday, May 12th at 7 pm. Tickets go on sale Friday at 10 am.


The show is being billed as “Cardi B & Friends,” but it is unknown who will be joining the Bronx rapper on stage. The performance serves as the 20th anniversary celebration for HOT 103.9 / 93.9, a Columbia hip-hop and R&B station.

Cardi B is best know for hits songs like “Bodak Yellow” and “I Like It.” Her debut studio album, Invasion of Privacy, debuted at number one on the Billboard 200, broke several streaming records and earned her a Grammy Award for Best Rap Album, making her the only woman to win the award as a solo artist.