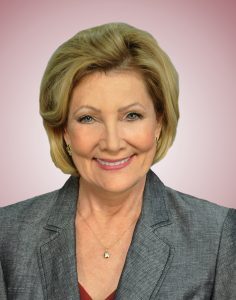 This year marks Debi’s 43rd year with Live 5 News. She co-anchors the 6 pm newscast and reports for the station’s investigative unit. Since joining the station in 1976, Chard has served as medical reporter, managing editor, assignment editor, and news producer. She was News Director from 1982 to 1985 and during that tenure she launched the first satellite news gathering truck in South Carolina.

Debi’s reporting took her around the globe, with foreign assignments in Egypt, the former Yugoslavia, the Philippines, China, Taiwan, Hong Kong and Costa Rica. Her passion for journalism and meteorology was demonstrated through coverage of natural disasters in the Lowcountry and across the United States, including Hurricane Gilbert (Jamaica), Andrew, Katrina, and floods in Iowa. She was an integral part of the Live 5 team honored with a Peabody Award for Hurricane Hugo coverage in 1989.

“We have family events, upcoming graduations and obligations to the rest of my family, especially my husband,” said Chard. “It’s important for me to have some family time and spend it with them. I love Live 5. They’re my family, but I also have to set priorities, so it’s time.” As for her message to Live 5 viewers, Debi says “ I want to thank the viewers for welcoming me into their homes. But more importantly, I appreciate their trust.”

“Debi displays class, professionalism and passion every day she arrives to work at WCSC”, Dan Cates, WCSC’s Vice President and General Manager said. “It’s an honor to be her co-worker. She puts just as much work into storytelling and investigative reporting as she does on the anchor desk. Debi’s decision came a little earlier than we expected, but to announce her retirement without fanfare or bringing attention to herself is ‘so Debi’. We are so proud and happy for her as she begins to enjoy retirement with her family.”

In 2018, the Southeast Chapter of the National Academy of Television Arts & Sciences inducted Debi, along with co-anchor Bill Sharpe, into their Silver Circle. Established in 1989, the Gold & Silver Circles honor a lifetime of dedication to the television industry. This prestigious award is reserved for those who persevere in an industry known for change and it was the first time an anchor team has been honored together. Mayor John Tecklenburg proclaimed September 5, 2018 as “Bill and Debi Day” in Charleston to honor the anchor team’s NATAS recognition.

For 20 years, Debi was the driving force behind Debi’s Kids, a holiday drive that raised hundreds of thousands in dollars and donations for local children and families in need.

In May of 2016, the newsroom at WCSC was renamed the Debi Chard Newsroom in her honor and appreciation for 40 years of dedicated service to Live 5 and the surrounding community.

July 15, 2003 was proclaimed Debi Chard Day in the City of Charleston for “dedicated service to the welfare of her fellow citizens.”

Debi graduated from the University of Iowa with double major in Journalism and Speech and Dramatic Arts and earned a Certificate of Broadcast Meteorology from Mississippi State. She is married, has three children and two grandchildren.