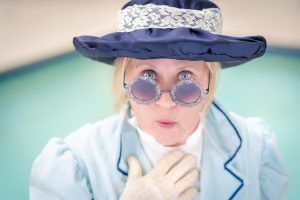 On Friday, April 5th, PURE Theatre opens the fifth production of their 16th Season: A Doll’s House, Part 2, by Lucas Hnath. Originally scheduled for a late 2018 run, this much-anticipated play comes to the Cannon Street Performing Arts Center for its Southeast Regional Premiere.

Nominated for 8 Tony Awards in 2017 and the winner of the 2017 Outer Critics Circle Awards for Outstanding New Broadway Play, A Doll’s House, Part 2 continues the story of Nora Helmer, who, in the final scene of playwright Henrik Ibsen’s 1879 groundbreaking masterwork, makes the shocking decision to leave her husband and children, and begin a life on her own. This climactic event—when Nora slams the door on everything in her life—instantly propelled world drama into the modern age. In A Doll’s House, Part 2, many years have passed since Nora’s exit. Now, there’s a knock on that same
door. Nora has returned. But why? And what will it mean for those she left behind?

A Doll’s House, Part 2 will be the third production at the Cannon Street Arts Center, a brand-new arts facility managed by the City of Charleston’s Office of Cultural Affairs.

“A Doll’s House, Part 2, is the number one produced play in the United States this theatre season,” Sharon Graci, PURE Theatre Artistic Director and director of the production, said. “The reasons why are pretty obvious. Lucas Hnath has an unmatched gift for language. His dialogue is sharp, and quick, and filled with finely tuned points and counterpoints. A few years ago the phrase, ‘It’s not your father’s…’ seemed to once again be all the rage, well, it’s appropriate to describe A Doll’s House, Part 2, as not your father’s (or mother’s) Ibsen. The setting may be Norway, just before the turn of the 20th Century, but the language is all now. And the issues, well those have spanned the more than 200 years between the two scripts.”

Tickets for A Doll’s House, Part 2 are on sale now at puretheatre.org and at the PURE Theatre box office. Advance purchases are strongly recommended. Additional information about the show can be found on PURE’s website or by calling the box office at 843-723-4444 Tuesday through Friday 10 am – 6 pm and two hours prior to curtain on performance days. PURE Theatre is now located at 134 Cannon Street.

West Ashley Takes a Seat at ‘The Longest Table’