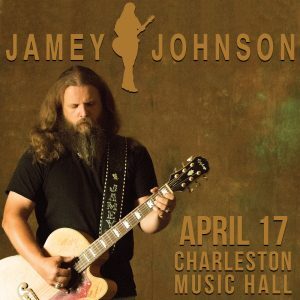 The Charleston Music Hall this week announced the return of platinum-selling singer/songwriter Jamey Johnson on Wednesday, April 17th at 8 pm. Tickets go on sale to the public on Friday, March 15th at 10 am.

The Washington Post considers Johnson to be “one of the greatest country singers of our time.” Plus, Johnson doesn’t create a set list, so no two shows are the same.

“I don’t know what I’m going to do until I am standing there doing it,” he said in a press release. “That is a freedom I have enjoyed ever since I began doing this, the ability to try something new.”

His 2008 album, That Lonesome Song, was certified platinum for 1 million in sales, and his 2010 double album, The Guitar Song, received a gold certification. He has been nominated for 11 Grammys.

In addition, he won two Song of the Year Trophies, for “Give It Away” and “In Color,” both from the Academy of Country Music and the Country Music Association. He has received praise from The New York Times, Rolling Stone, The Wall Street Journal and other publications.

Follow us
Related Topics:charleston music hallJamey Johnson
Up Next

The Brick to host Fyre Festival (Party) on April 1st