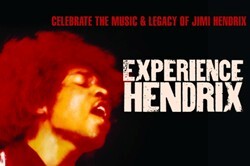 The 2019 Experience Hendrix Tour rolled into town Friday night (March 8th), and not only blew the roof off the Performing Arts Center, the show rocked North Charleston from Montague Avenue to I-26. From aspiring musicians to baby boomers, the crowd was a mixed bag of Hendrix admirers of all ages. For fans of great music, and even greater musicianship, Experience Hendrix is equivalent to the Super Bowl for sports lovers.

After Jimi’s sister and Experience Hendrix founder Janie Hendrix welcomed attendees to the PAC, the show kicked off at exactly 8 pm like a fine-tuned timepiece. What unfolded over the next three hours is nothing short of guitar nirvana. Twenty of the best guitarists, bass players, percussionists, and drummers revolved on and off stage, offering up a musical montage from arguably the all time greatest axe -man in the history of rock n’ roll.

This complement of artists included Billy Cox who toured with Hendrix, to musicians born after Jimi’s death. Hendrix’ music has become legendary over the past 50 plus years and anyone who plays guitar or bass wants to play Hendrix. Blues, jazz, fusion, and acid rock, Jimi Hendrix could do it all and the performers on the 2019 Experience Hendrix Tour are masters of several musical genres. Guitar gods and one goddess (Ana Popovic) electrified the North Charleston stage.

The first 90 minutes of the concert showcased the talents of the Slide Brothers, Dweezil Zappa, Mato Nanji, Popovic, Eric Johnson, and Jonny Lang, with veteran drummer Chris Layton (Stevie Ray Vaughan’s Double Trouble), and veteran bassist Kevin McCormick providing complement music. With little more than their instruments and raw God given talent to entertain the crowd, a lone big screen backdrop showing Hendrix and psychedelic imagery further enhanced the overall late 1960’s & early 70’s vibe. Many of the artist took to the mike but it was Jimi’s cousin, Henri Brown adding many of the soulful sounds.

While the line up is nothing short of awesome, it was the over the top and guttural energy of Zakk Wylde (Ozzy Osbourne & Black Label Society) that brought concert goers to their feet. One of the craziest and most gifted guitarists of this generation, Wylde a last minute addition to the show worked the stage and the audience masterfully. Wylde strutted from all corners of the stage before bringing his prowess into the crowd, allowing those in the far back a photo op and an in your face Hendrix experience. If the concert had ended there fans would have gotten their tickets worth.

After a short intermission filled with early pictures of Jimi on the big screen, the show returned with many of the same musicians taking part with the exception of Megadeth’s Dave Mustaine who aptly said ‘lets speed things up a bit. With Lang providing vocals he and Mustaine rocketed thru Hendrix’ ‘Fire’ and ‘Stone Free’ set to a blazing video backdrop. One of the highlights of the evening, especially for metal fans.

Satriani is a master of his craft and fans ate it up. Like Wylde, Satriani can do just about anything with the guitar. Aronoff is billed as the hardest hitting man on the drums and his performance validated that claim. But it was the enchanting vocals of Pinnick that was mind blowing. All the singers did justice to Hendrix, however Pinnick seemed to embrace the smooth yet unrefined grit that set Hendrix apart. Early online reviews suggest the three should form a band, and I couldn’t agree more.

A total of 29 extended versions of Hendrix songs wonderfully emanated from the stage at the North Charleston PAC. From ‘Freedom’ and ‘Foxy Lady’ to ‘Red House’ it was three hours of non-stop guitar driven madness celebrating the ultimate guitar god, Mr. Jimi Hendrix. Several of his classic rock radio hits made the cut including ‘Hey Joe’, ‘All Along The Watchtower’, ‘The Wind Cries Mary’, and the Bob Dylan cover ‘Like A Rolling Stone’.

Experience Hendrix has been going strong for over two decades with many of the current artists taking part. The lineup changes from year to year with special guests added when available. In its 20 plus year run the talent pool has never been this strong. If you love Hendrix or if you love musicians who have mastered their instrument, than I would strongly urge you to get off the couch and catch this tour if it plays anywhere near your town. Better yet make it a rock n’ roll road trip.