Whether Legend or Myth, Fatty’s Beer Works Is The Real Deal

There are no shortages of Lowcountry-based craft brew makers. While some have been around for more than two decades proudly boasting names linked to Charleston, others still have popped up just in the past five or six years. With no exact count there are roughly two dozen or more beer enthused artisans dotted throughout the tri-county.

Among the late comers perhaps no one has grown more attention and visibility, as quickly than Fatty’s Beer Works. St. Patrick’s Day 2019 will mark the two year anniversary (site location) for Charleston’s fastest growing locally owned craft beer maker. The brainchild of Aiken (a long par five distance from Augusta National) native David ‘Fatty’ McLain, Fatty’s Beer Works came about when the 2002 Clemson grad was playing night golf with his dog and had a cosmic vision.

The legend goes, Fatty is a quasi-military, time traveling brew master who may or may not have been featured on the Beatles ‘Sgt. Pepper’s Lonely Hearts Club’ album. Like Doc Brown in ‘Back To The Future’, Fatty transports himself through different ages introducing commoners to his down to earth beer concoctions. Although Fatty’s travels span centuries, he somehow has a strong kinship and foothold to Charleston, SC. It is in the Holy City of Charleston that Fatty first began his ‘brew quest’ back in the year 2014. When it comes to beer you can’t make this kind of stuff up.

McLain spent the next few years imagining and growing his vision in his head all the while deciding to buck the traditional system and not seek outside corporate influence, or big money from interest loving suits with the banks. Rather he pumped all his hard earned cash into his new found passion. As the dream became a reality he took on veteran brew master and New England native Ben Chambers, who spent the better part of ten years plying his trade at Coors and Sweetwater Brewing before joining Fatty’s. When Adam Helms who hails from Winston Salem came on board the ‘three brewskateers of beer’ was complete.

A tried and true beer lover, McLain started his craft brew house due to one reason, “I just couldn’t work for anyone else”. While some might call that a slacker, his business plan suggests he’s a visionary. A bit of a non-conformist McLain didn’t start out to make just another craft beer, but to make really great beer, celebrated by the masses. Now with Ben and Adam as part of the team, the trio are doing just that, with more than 16 regular hop, yeast, & barley blends to satisfy fellow beer lovers. From bitter to bold, and from pale ales and reds to lagers and porters, Fatty’s Beer Works has an intoxicating elixir for even the discerning revelers of beer.

Situated at 1436 Meeting Street at the intersection of Lemon (seems fitting), Fatty’s is a non-descript building on the former site of Dr. Ice, and adjacent to a popular tattoo parlor. The interior of Fatty’s resembles a cross between a college dorm and a medieval grotto. It’s industrial yet inviting. The countertop, the stools, and much of the décor is fashioned out of century old wood from James Island and Charleston area antebellum homes. Apparently Fatty has made many friends during his frequent century old journeys.

The lounge at Fatty’s Beer Works has a well worn leather couch ideal for long visits, right next to the vintage Pac-Man Machine. Weather permitting you can enjoy a game of corn-hole, oversized Jenga, or try your luck at ‘Grate Golf’ with an American theme. Apparently the ladies know how to score big on the red, white, & blue holed non-traditional putting green.

As you throw open the two oversized garaged doors and step inside, there’s no disguising what they do at Fatty’s. One half the room is filled with glistening & gleaming metallic vats holding your future brew intake. On the right side is the gathering space, complete with a taproom, quaint historic bar, and stools, aside the informal sitting room.

But the real reason you come to Fatty’s is for the intoxicating alcohol infused liquid refreshments. During my visit I sampled four very different drafts. While all were worthy I thoroughly enjoyed the TSAR WARS, a bold Russian Imperial Stout proudly boasting 9.6% ABV (alcohol by volume). TSAR WARS a tongue & cheek variation of Star Wars has a commanding flavor, with a hint of cinnamon bark and vanilla bean. If you’re wanting to go to the ‘dark side’ TSAR WARS is out of this world refreshing. Need I say more.

If you love an IPA (Indian Pale Ale) with character than First Shot is your first choice. Modeled after the west coast IPA’s First Shot oozes a distinctive floral fragrance, allowing for a subtle awakening of the palate without an aftertaste. On the flip side the Strawberry Mango Lassi is a sweet and savory brewed concoction reminiscent of a smoothie. The fruitiness is evident from the first swig, with the strawberry extract the more dominant flavor. Wine lovers will find consolation in either Indian ales.

Perhaps you’re looking for a unique beer that embodies the essence of the low country. Well look no further than one of the recent creations 38CH42 Oyster Stout (5.5 ABV), named for archaeological three shell ring salt marsh affectionately called ‘Fig Island’. As their itinerary suggests, it is a full bodied stout with a suggestive briny taste. You know that early morning air that surrounds you down at the fishing pier, that’s the ethereal sensation you’ll get from 38CH42. Brewed with a smoky malt pungency 38CH42 celebrates the coastal region of South Carolina.

A growing trend with craft beer makers is the inclusion of CBD, or cannabidiol. While not technically a hallucinogen; it’s the part of weed (brewed industrial hemp) that gives your body a natural high. Fatty’s is embracing that desire, offering up their own twisted miscellany, appropriately named the 710 SMaSH. A Single Malt and Single Hop cannabis infused light beer, 710 SMaSH is ideal when you have the munchies or just want to chill on the leather sofa. When Fatty’s new Frontiersman CBD beer is approved, Fatty’s will be the first brewery to bring a packaged CBD beer to the marketplace. What I love about the CBD acronym for cannabidiol is that it reflects the tri-county Charleston, Berkeley, and Dorchester counties birthplace.

Of course if you don’t prefer beer (maybe you’re from another planet) Fatty’s does offer up a few wine selections for the peculiar person in your party. Not a restaurant Fatty’s does invite the occasional food truck to set up camp, more so on the weekends. Of course Fatty’s does from time to time offer BBQ Sliders and snack food. All the right stuff that complements great beer.

Fatty’s Beer Works is a laid back craft brew house. Among their offerings are lagers brewed with local grits, traditional brews Fatty’s may have introduced to Englishmen in the 1700’s, as well IPA’s derived from Carolina malt. There is even a beer recognizing Ben’s New England heritage. The Lazy Hazy meshes oat and wheat extracts together, creating an unfiltered hazy colored brew that gives your pallet a jolt unlike any other IPA. Each brew is Fatty’s own masterful creation, some celebrating the low country, while others toast the California coast or regions of eastern Europe.

Throughout his excursions saluting the origins of beer, Fatty’s has touched down in Ireland, Germany, Norway, England, Portugal, and Switzerland. His treks across the continental 48 states has lead Fatty’s to Alamagordo, New Mexico travelling east to Aiken & Georgetown in South Carolina, but all after a three day stop in Woodstock NY in August of 1969 where he may have inspired hippie activist Wavy Gravy. It is however in Charleston that Fatty found a more permanent home, circa 2015. 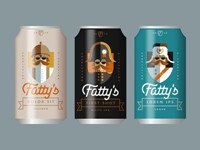 Come in and stay for a while, try your skill on the putting green, enjoy a food truck and live music on the weekend, or order the 710 and just relax. If you’re old enough by SC law to drink alcohol you’re welcome at Fatty’s. When it’s time to leave maybe carry home a growler. Fatty’s is open 4-9pm Monday thru Thursday, 4-10pm on Friday, noon-10pm Saturday, and 2-9pm on Sunday. You can find their concoctions at several of your favorite low country tap rooms as well as some of the area supermarkets. For an old soul, Fatty gets around.

Beer is one of the most time honored beverages since creation, and if you want to delve into the ‘brew tales’ that make up your favorite beer at Fatty’s, all you have to do is visit the story makers at their location or time travel on their website at https://www.fattysbeerworks.com/. Come experience one of a kind beers from the most celebrated time travelling brew master in all of history. Whether Fatty is a myth or a legend it’s up to the beer drinker to decide.  Locals are discovering one thing for sure, Fatty’s makes great beer.

14th Annual Charleston Wine & Food Fest Has Something For Everyone