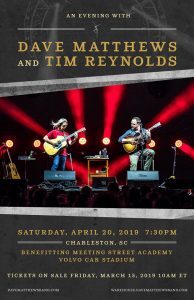 The Volvo Car Stadium today announced they will host An Evening With Dave Matthews and Tim Reynolds on Saturday, April 20th at 7:30 pm. Proceeds from the show will benefit Meeting Street Schools (MSS), a Charleston-based non-profit network of public and private schools.


An online pre-sale for the Dave Matthews Band’s fan association began today at 10 am. Tickets go on sale to the general public on Friday, March 15th at 10 am. Click here for ticket information.

Matthews and Reynolds met more than 25 years ago in Charlottesville, VA and have been collaborating ever since. Matthews is best known as the vocalist/guitarist for Dave Matthews Band (DMB), which has sold a collective 38 million units (CD and DVD combined) since the 1994 release of its major label debut, Under the Table and Dreaming. In 2003, he released his solo debut, Some Devil, which Reynolds played on.
Reynolds founded the breakthrough electric power trio TR3 (Tim Reynolds Trio) and has also released a series of solo albums. He has performed on nearly all of DMB’s albums and has been touring with them full-time since 2008. Matthews and Reynolds have released three live double-CDs as a duo: 1999’s multi-Platinum Live At Luther College, Live At Radio City (2007) and Live In Las Vegas (2010).
The duo’s acoustic sets feature mostly DMB tunes with some covers songs and Reynolds/TR3 originals sprinkled in.
The two musicians are currently touring Europe with DMB. The band will kick off its 2019 summer tour with an April 30th show at the Pensacola Bay Center in Pensacola, FL. Tickets are on sale now at http://www.davematthewsband.com

Meeting Street Schools (MSS) is a “groundbreaking initiative dedicated to the creation of a new mandate for education in South Carolina and beyond. MSS was founded upon the belief that all children deserve an excellent education regardless of their geographic or socioeconomic circumstances, and all children have the ability to excel in the classroom. Where access to quality public education or affordable private alternatives is severely limited, MSS is providing children with transformational educational opportunities.”

You can learn more about MSS here.