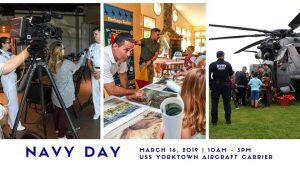 On Saturday, March 16th, the USS Yorktown aircraft carrier will host sailors from more than a half-dozen different Navy programs for Navy Day at Patriots Point Naval & Maritime Museum. The event will run from 10 am to 3 pm and will be included in general admission. Former and active duty sailors will be free.

In addition to meeting visitors and talking about different departments of the Navy, an aircrew will fly an MH-60 “Romeo” helicopter to the museum. The helicopter crew will land the aircraft at Patriots Point just before Navy Day begins and offer tours of it throughout the day.

Navy activities offered at Patriots Point to include:

Navy Day at Patriots Point Naval & Maritime Museum is part of Charleston Navy Week organized by the Navy Office of Community Outreach (NAVCO). Navy Weeks are designed to give Americans the opportunity to learn about the Navy, its people and its importance to national security and prosperity. Charleston is one of 14 different Navy Weeks scheduled across the United States in 2019.

Follow us
Related Topics:Charleston Navy WeekNavy Daypatriots point
Up Next