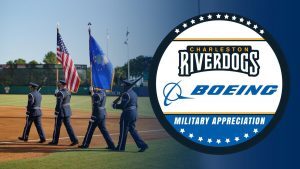 Boeing has been named a 20/20 Partner of the Charleston RiverDogs, making the world’s largest aerospace company one of a group of partners committed to the vision of RiverDogs baseball and Joe Riley Park for the future.

Accompanying Budweiser and MUSC Health as a 20/20 partner, Boeing joins the Charleston club in strengthening the relationship between strong community-minded businesses and the RiverDogs. Boeing’s connection with the RiverDogs will offer several opportunities to showcase both organizations’ commitment to recognize, honor, and support military and veteran personnel and their families.

“The RiverDogs remain steadfast in our efforts to honor the military in the Lowcountry and bring awareness to the effort and sacrifice of veterans. We are thrilled to be partnering with Boeing to further these initiatives,” said Dave Echols, President and General Manager of the Charleston RiverDogs.

“Veterans and their families are a vital part of our company, our community, and our country. We are thrilled to partner with the Charleston RiverDogs to thank our veterans for their service and celebrate their contributions with America’s favorite pastime,” said Ashley Holbrook, Director of National Strategy and Engagement, Government Operations, Boeing South Carolina.

Exhibiting Boeing and the RiverDogs’ commitment to honoring the armed forces, a new, single, black seat, the POW/MIA “Chair of Honor,” will be a permanent fixture at The Joe all season long. The RiverDogs will host a dedication ceremony prior to the first pitch of the second game of the season on Friday, April 12.

Along with honoring the memory of past service members, Boeing will join forces with the RiverDogs in hosting three Military Appreciation Nights to honor active and retired military members in the local community on Saturday, May 25, Monday, July 1, and Friday, August 2. In conjunction with Boeing, the RiverDogs will offer complementary tickets to all active and retired service members and their families for these special event games.

Not just limited to three home dates throughout the season, RiverDogs players and staff will also wear specialty red jerseys at each Friday home game, expressing their support of the armed forces. As part of Red Shirt Fridays, fans wearing a red shirt may receive $1 off regular ticket pricing at the box office with the option to donate that dollar back to support various veteran’s non-profit groups in the Lowcountry. During an inning break at every Friday home game, a deployed military serviceman, servicewoman – – or veteran unable to attend the game – will be called and thanked by all in attendance for their service.

At each of the RiverDogs’ 70 home tilts during the year, Boeing will help present the “Hero of the Game,” recognizing an outstanding veteran while giving the special guest and their family a VIP treatment at the ballpark. As the Hero of the Game, honorees and their families are treated to the Riley Park Club experience, recognized on the video board and through public address with a description of their contributions to our country. Along with honoring one “Hero of the Game,” there will be a special in-game recognition, asking all veterans in attendance to stand at each of the RiverDogs’ home contests during the year.

For further details about the RiverDogs and Boeing’s military appreciation programs, how to nominate a veteran to be honored at a game this season, and complementary military tickets available throughout the year, visit the RiverDogs’ Military homepage at riverdogs.com/military.