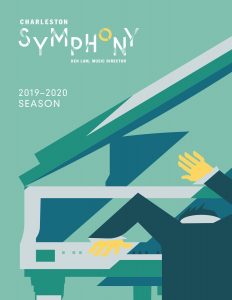 Last week, the Charleston Symphony announced the launch of their 2019-2020 season, which the they are calling “their most ambitious season of music yet.” Overlapping with the City of Charleston’s 350th anniversary next year, the CSO’s 83rd season will celebrate the numerous contributions of our city’s own musicians and artists to the world of classical music and fine art.

The Charleston Symphony’s flagship Masterworks series, conducted by Maestro Ken Lam, will kick off with the performance “Mozart in the Lowcountry,” featuring Mozart’s Symphony No. 39 and the return of Charleston composer Edward Hart’s celebrated concerto, Under an Indigo Sky, which the Symphony first performed to a sold-out crowd at the Gaillard Center shortly before its renovations began in 2012. Other Masterworks season highlights include a collaboration with Charleston watercolorist Mary Whyte for the premiere of her anticipated new collection, We the People, as well as the return of pianist and composer Conrad Tao, a highly sought-after former child prodigy whose international star continues to rise.

The Charleston Symphony Orchestra will close the other end of their season with “Charleston and the New World,” a concert designed as part of the City of Charleston’s 350th Anniversary Celebration in 2020. The CSO will perform Dvorak’s New World Symphony, a rhapsody by Charleston’s leading 20th century African-American composer, Edmond Thornton Jenkins, and the world premiere of Edward Hart’s latest work, A Charleston Concerto.

The Charleston Symphony’s Pops series—Masterworks’ lighthearted counterpart—will return with Yuriy Bekker leading four thematic performances: “Music at the Movies,” featuring themes from classics like Gone with the Wind, Saving Private Ryan, and 2001: A Space Odyssey; “Holiday Pops,” Charleston’s favorite holiday concert; “From Russians with Love,” an ode to the music of Bekker’s homeland; and “Ranky Tanky with the CSO,” a collaboration with Charleston’s own Gullah-inspired jazz band.

Subscriptions to the new season went on sale to the general public today. The CSO offers season passes to Pops and Masterworks, as well as Pick 6, a new option that allows patrons to build their own season of music. Masterworks subscriptions start at $184, Pops $92, and Pick 6 $138. To learn more about the CSO’s 2019-2020 season and how you can subscribe, visit charlestonsymphony.org or call 843-723-7528.

This year, the Charleston Symphony Orchestra will enter its 83rd season of providing superior musical performances to the area. Founded in 1936, the CSO is the cornerstone of Charleston’s arts scene, performing its Masterworks and Pops series at the Gaillard Center and throughout the tri-county region. Employing 24 full-time musicians and 14 full-time staff, the CSO also participates in numerous community outreach events, special concerts, and school programs throughout South Carolina.

Follow us
Related Topics:Charleston Symphonycharleston symphony orchestra
Up Next