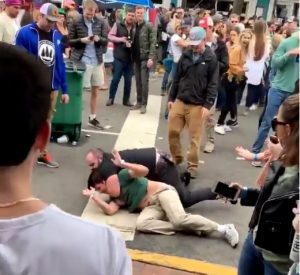 The Folly Association of Business today announced that they will be ending the annual Folly Gras Festival after numerous arrests and fights at this year’s event. According to ABC News 4, about two dozen people were arrested during the event on Saturday and videos of fights were circulating on social media. You can see some videos below.


“Over the last few years, the event has drawn an unappealing crowd that is not in keeping with the objective set forth by The Folly Association of Business (FAB),” the event’s organizers said in a press release.

The statement continued: “Several isolated incidents that took place during Saturday’s event have led FAB to conclude that the Folly Gras brand has fallen out of line with it’s desired intent, which is to provide a fun and respectable day of celebration for the community.”

“We want to thank all of the people who came out to Folly Gras to have fun and we apologize for those few people who don’t respect our community and have to ruin everyone else’s good time,” FAB President Steve Carroll said. “Honestly, we feel that Folly Gras has essentially outgrown its venue; the venue being our quaint little beach town. At this point, it is not what we need for the city, the businesses or the community so we’re going to put it to rest.”

According to FAB, Folly Gras 2019 drew more than 11,000 people, which was the event’s largest crowd ever. The organization says several “party buses” loaded with people arrived at this year’s event and security refused entry to people who were already intoxicated. FAB said they’ve increased security and “reworked logistics to address crowd control issues” over the past few years, but the efforts weren’t enough to prevent the aforementioned incidents.

You can see videos from some of Saturday’s incidents below.

–
FAB is an organization that works to strengthen the business district on Folly Beach. This includes “facilitating collaboration within the Folly Beach business community, organizing support of charitable organizations and executing the festivals that bring off-season revenue and support Folly Beach charities.”