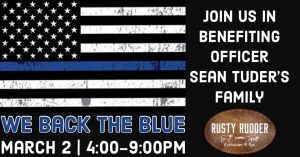 Recently, a part of The Rusty Rudder team lost a family member – Officer Sean Tuder of the Mobile, AL police department. Officer Tuder was killed in the line of duty while serving and protecting his community on January 20th. In light of this tragedy, the restaurant will be donating 10% of all proceeds from 4 pm to 9 pm on Saturday, March 2nd to Officer Tuder’s family. This off includes their all-you-can-eat oyster roast.

The restaurant would also like to accept cards of thanks and tokens of appreciation to be delivered to our local police department on behalf of our community.

Officer Tuder was a member of the Alabama National Guard in the 173rd infantry unit where he earned the rank of specialist. He previously served with the Palatka, FL Police Department before joining the Mobile Police Department in 2016 where he spent most of his time there at 1st Precinct. He was named “Officer of the Month” in 2017. Sean married the love of his life, Krissy Ising on March 18, 2017. The two had been together for 10 years. Sean will be remembered for his bravery and service to our city and nation. We can all learn from Sean the valuable lesson of putting others first. He was adored by his family and friends and will be deeply missed by all.