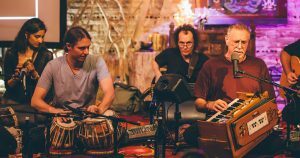 Grammy-nominated musician Krishna Das is returning to Charleston for his second time to help raise money for a new community center focused on adults and children with autism. The event, which will be held on Wednesday, March 13th at the Memminger Auditorium, includes a silent auction and concert.

Das has released 13 albums in the past twelve years, becoming the soundtrack for yoga practice in the United States, Europe, and Asia. He performs over 100 times a year all over the world. His recordings and concerts feature well known musicians such as Sting, Steely Dan’s Walter Becker, Def Leppard’s Rick Allen, and Michael Franti. In 2013, he played kirtan – call and response chanting in the ancient Sanskrit language – at the Grammy’s, making it the first time in the history of the show.

Doors for the fundraiser open at 5:45 pm. Tickets are $50 in advance, $55 at the door. Children 12 & under are free. The event is presented by Satsang Yoga Charleston.

Today, the Center for Disease Control estimates that one in 150 8-year-olds in the U.S. has an autism spectrum disorder.