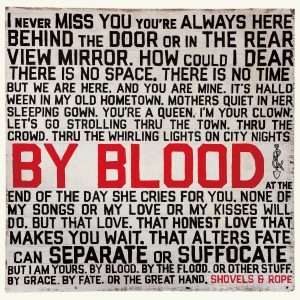 Shovels & Rope, Charleston’s favorite duo, have not only released a brand new single, they’ve also announced the name and release date of their seventh studio album.

By Blood will be released via New West Records on April 12th via Dualtone Records. The album is the highly-anticipated follow up to the group’s 2017 cover album titled Busted Jukebox Vol. 2. Shovels & Rope’s first single from the new record is “The Wire,” which you can list to below.

By Blood will include 10 tracks and can be purchased on vinyl, CD, and digital download. The band is also offering album packages that include t-shirts, test pressings, handwritten lyrics, and more. You can pre-order the album here.

The track listing is as follows:

The band’s next live performance will be at the High Water Festival in April.