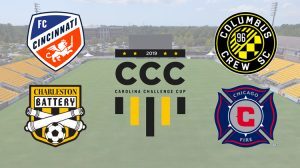 This month, the Charleston Battery will once again host the annual Carolina Challenge Cup at MUSC Health Stadium on Daniel Island. This year’s event will feature four teams in six matches over three days.

The event will be a great opportunity for Charleston fans to get their first look at the Battery as they take on some top competition. This year’s tournament schedule is as follows:

Lady Gamecocks Defeated by #4/5 UConn on the Road