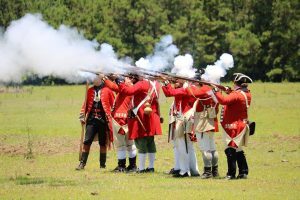 On Saturday, February 16th and Sunday, February 17th, history comes to life as the battles that surrounded the city for 42 days in 1780 are recreated. The Siege of Charles Town was the longest and one of the most critical assaults of the Revolutionary War, involving over 15,000 men.

The surrender of the outnumbered Continentals nearly destroyed the main army and gave rise to legendary leaders like Francis Marion and Thomas Sumter. The siege of the city marked the early days of the brutal Southern Campaign, where South Carolina would commit more lives and funds to the cause of American independence than any other state in the War.

2019 marks the 239th anniversary of that event. The Siege of Charles Town reenactment from Colonial South Events will highlight the struggle for American independence and educate audiences on American history and colonial life. The reenactment features skirmishes for the city, guest speakers, children’s educational programs, artisan craftsman, and much more. Visitors will get to explore a living 18th century experience and talk to the men and women who called it home, as the Continental and the English armies practice military drills and settlers engage in the rustic activities that made colonial life possible.

The Siege of Charles Town is led by veteran reenactors Sean Wallis and Ariel Dinkins, who share over 15 years combined experience in the field. Colonial history is their passion, and they bring their enthusiasm with them in presenting this important historic event. The reenactment will be held at the Mullet Hall Equestrian Center, with an anticipated turn out of at least 300 attendees.