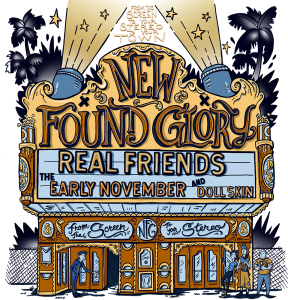 Pop-punk icons New Found Glory will bring their “From The Screen To Your Stereo To Your Town” tour to the Music Farm on Thursday, May 30th at 6:30 pm. The band will be joined by special guests Real Friends, The Early November, and Doll Skin.
New Found Glory will be touring in support of the next chapter in their From the Screen to Your Stereo compilation series where they cover classic songs that have appeared in movies. Past albums in the series have included covers of tracks like “My Heart Will Go On,”  “The Goonies ‘R’ Good Enough,” “Kiss Me,” “Iris,” “King of Wishful Thinking,” and “Don’t You (Forget About Me).”
The new album, From The Screen To Your Stereo 3, will be released on May 3rd. For fans that want to attend the show and purchase the album, New Found Glory is offering the “Super Fan Bundle” package. It includes:

Celebrate Valentine’s Day by Drinking Champagne In A Helicopter