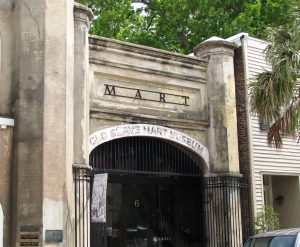 In honor of Black History Month, the Old Slave Mart Museum will be open 1 pm to 5 pm on Sundays in February. Additionally, city of Charleston employees and their immediate family can visit the museum for free this month.

A free, public presentation celebrating the life of Dr. Ernest Everett Just, a trailblazing biologist who was born in Charleston in 1883, will be given by Alphonso Brown at 6 pm on February 22nd.

Old Slave Mart Museum Operations Director Ista Clarke said, “For Black History Month we work to continually highlight those who have come before in hopes that we can inspire and enlighten those who came afterwards.”

The only known building used as a slave auction gallery in South Carolina still in existence, the Old Slave Mart, located at 6 Chalmers Street, was once part of a complex of buildings known as Ryan’s Mart that occupied the land between Chalmers and Queen Streets. Owned and operated by the City of Charleston, the Old Slave Mart Museum recounts the story of Charleston’s role in the inter-state slave trade by focusing on the history of the building, site and the slave sales that occurred there. Admission to the museum is $8 for adults and $5 for seniors, students and military personnel.