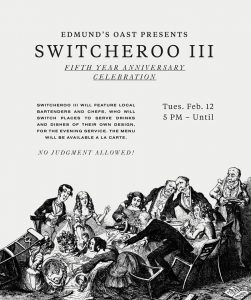 Edmund’s Oast Restaurant will celebrate its 5-year anniversary with 5 days of special deals and events to say thank you to the Charleston community for its support.

To learn more, visit us at http://edmundsoast.com/restaurant/

Join Google as Hundreds of Students “Storm The Citadel!” Saturday

Chris Singleton to Speak at Awaken Church on 2/17