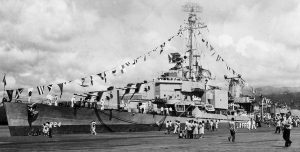 On February 8th at 11 am, Patriots Point Naval & Maritime Museum and the USS Laffey Association will host a free ceremony to celebrate the 75th anniversary of the USS Laffey’s Commissioning as an active duty destroyer in the U.S. Navy.  Those who attend the service will not be charged for parking or admission.

The free ceremony will be held aboard the USS Laffey and will include remarks from former crew members. The Laffey is the last remaining Sumner-class destroyer and well known for its role in the Battle of Okinawa during World War II. During the battle, the ship was hit by six kamikazes and three bombs. Within 90 minutes, 32 men were killed.  Despite sustaining heavy damage, the Laffey was able to remain afloat and earned the nickname “The Ship That Would Not Die.”

In addition to World War II, the Laffey later served in the Korean and Cold Wars. The destroyer was decommissioned for the final time on March 9, 1975. After opening to visitors at Patriots Point Naval & Maritime Museum in 1981, the Laffey was declared a National Historic Landmark in 1986.

At the conclusion of the ceremony, Laffey crew members will offer guided tours of the ship.