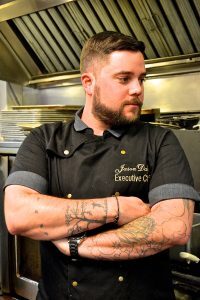 The Refuge on Isle of Palms has hired Executive Chef Jason Daly, formerly of Warehouse Kitchen and Bar. Daly was recently featured on Food Network’s Chopped, making it all the way to the finals of their “Surf and Turf Battle.”

According to a press release, Daly’s vision for The Refuge is to “bring fresh, high quality seafood fused with his Contemporary American cuisine to the island. He plans to blend his New England roots and extensive experience with North Atlantic shellfish with the southern flavor profile to provide a unique dining experience for the Lowcountry. Look out for lots of lobster, clams, oysters and local fresh fish on his upcoming menu and a weekly Tuesday “Steakhouse Night” featuring a variety of Certified Angus Beef paired with elevated versions of classic shareable sides, as well as a signature brisket and short rib steakhouse burger. ” The new menu will be released on March 1st.