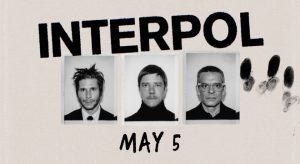 The New York band has been making headlines since their inception. Their debut album, 2002’s Turn on the Bright Lights, ranked 10th on NME’s list of top albums in 2002 and number one on Pitchfork Media’s Top 50 Albums of 2002. Interpol’s last release was Marauder, their sixth studio album, which was released on August 24th, 2018. You can listen to their latest single below.

Tickets to their North Charleston show can be purchased here.

Follow us
Related Topics:Interpolnorth charleston performing arts center
Up Next

Sublime with Rome Returns to Daniel Island this Summer