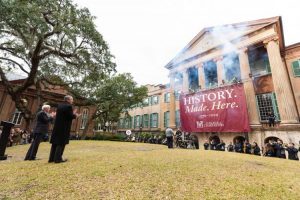 Amid musical fanfare from Chucktown Sound in historic Cistern Yard, College of Charleston Interim President Stephen C. Osborne ’73 on Wednesday unveiled the theme for the College’s upcoming 250th anniversary in 2020.

Under dramatic lights and smoke, the theme was revealed: “History.Made.Here.” And the announcement was made on the College’s 249th birthday, Jan. 30, 2019. The date is tied to Jan. 30, 1770, when South Carolina Lieutenant Governor William Bull recommended to the colony’s general assembly the establishment of a college in Charleston.

“From having three signers of the Declaration of Independence and three signers of the Constitution to graduating numerous alumni who have left their mark on the world and advanced our society through their tireless efforts, the College has a very strong and consistent track record in the history books,” Osborne said. “For nearly 250 years, we’ve made history in academic research, scholarly discoveries and athletic victories. While our past is certainly rich with exciting moments, it’s our bright future that is waiting for us to create more historical moments.”

Board of Trustees Chair David Hay ’81 announced that once Osborne’s tenure as interim president ends in May, he will assume a new volunteer senior level leadership role on the College’s 250th Board of Directors. The College has hired Cande Cook as project director for the 250th anniversary commemorations. And last fall seven campus-wide committees were formed to help develop, plan and implement ideas and events for CofC’s sestercentenial celebration. The committees include:

“This is an exciting time for the College,” said Osborne to a crowd of more than 150 students, faculty and staff. “Only a dozen other universities have celebrated such a historic milestone. As we prepare to launch our 250th anniversary celebration later this fall, our goal will be for our celebration to be both meaningful and memorable and inclusive of our worldwide College of Charleston family. During our 250th celebration, we will reflect on our past, express thanks for where we are today, and boldly imagine where we can go in the future.”