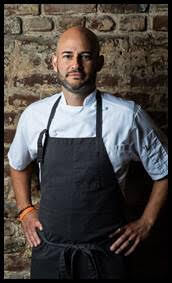 Cannon Green last week announced that Orlando Pagán is its new Executive Chef. In this role, Pagán will oversee the culinary program for Chef’s Table dining, private parties, and large-scale events at the venue. Pagán will also spearhead the launch of the anticipated new restaurant concept within the property, slated to open this spring.

Pagán, most recently the Executive Chef of McCrady’s Tavern, is a native of Puerto Rico. He grew up with an innate love of cooking and left home as a teenager to pursue a culinary education at Johnson & Wales University in Miami. After graduating, Pagán honed his skills in several celebrated and Michelin-starred kitchens, including Bizcaya Grill at the Ritz Carlton Coconut Grove, Gary Danko, Silks, Ame, State Bird Provisions, Aziza and The Village Pub. Pagán returned to the East Coast in 2017, where he joined Chef Sean Brock in the kitchen at McCrady’s Tavern, eventually earning the title of Executive Chef in 2018.

“We couldn’t be more thrilled to welcome Orlando to Cannon Green,” Dean Porter Andrews, co-founder of Easton Porter Group, the ownership company for Cannon Green, said. “He is an immensely talented and creative chef, and the ideal candidate to hit the ground running as we start this new chapter for Cannon Green and our new restaurant concept this year. We look forward to the vision and leadership Orlando will bring to the table.”

THE FUTURE OF CANNON GREEN

Pagán will work closely with Executive Chef Vinson Petrillo of Zero Restaurant + Bar, another property within the Easton Porter Group portfolio, to shape the concept, menus, and overall experience for the new restaurant at Cannon Green. Petrillo’s is also Easton Porter Group’s Creative Culinary Director. The anticipated opening for the new restaurant is slated for spring 2019 following interior renovations. Pagán takes over the executive chef role from Michael Perez, who will depart Cannon Green in early February.