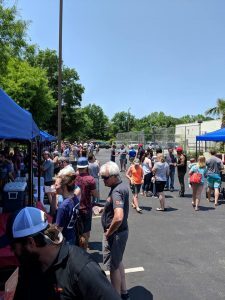 James Island’s only brewery, Fam’s Brewing Co., is turning two this year and will be celebrating with the return of their annual homebrew competition and festival. The Chucktown Brewdown will be held on Saturday, April 20th, from 1 pm to 5 pm.

Thirty-two local homebrewing teams will compete for the opportunity to work with head brewer Justin Famulari to recreate their winning beer and have it placed on tap at the James Island brewery. They will also receive a brewing material grab bag and gift certificates to Famulari’s and Beer Engineer Supply.
Each year there will be a different style of beer for the competitors. Last year the competition centered around Amber beers, and this year the style is IPA beer.
The judges will be: Justin Famulari (Fam’s Brewing Co.), Ryan Coker (Revelry Brewing Co.), and Dustin Wilson (Dockery’s).
Registration is $15 per team and includes one event t-shirt, a Famulari’s gift card, 10% off ingredients at Beer Engineer Supply, and day-of-the-event supplies (tents, tables, and ice).
Homebrewers can visit https://www.famularis.com/chucktownbrewdown for official rules and too register. Registration closes on Monday, February 18th at 5 pm.
Last year’s winning team was Paddle Out Brewhouse (Sean Barnes and Travis Brown) with their Jake’s Red IPA.
Fam’s Brewing Co. is located on James Island at 1291 Folly Road beside Gold’s Gym.