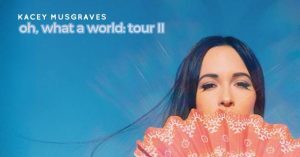 Multiple Grammy award-winning Country singer/songwriter Kacey Musgraves has added a Charleston area concert to her “Oh, What a World: Tour.” The musician will perform at Daniel Island’s Volvo Car Stadium on September 20th.

Artist pre-sale for this show began today. Tickets go on sale to the general public beginning on February 8th at 10 am local time at http://www.kaceymusgraves.com/tour.

Over the past year, Musgraves has toured extensively in support of Golden Hour to massive critical reception, with NPR summarizing, “Kacey Musgraves is magnetic – there are no two ways about it.” One month into the sold-out North American leg of her “Oh, What a World: Tour,” Musgraves has dazzled press and fans alike. Billboard declared, “leaving the packed theatre would have anyone convinced: Musgraves isn’t just breaking country’s rules, but re-writing them,” while Rolling Stone observed, “with each successive record, culminating in the velvety and confident Golden Hour, Musgraves has expanded both her sonics and her fan base.”

On February 10th, she will perform at the 61st Annual Grammy Awards in celebration of her four nominations for Album of the Year and Best Country Album, Best Country Solo Performance for “Butterflies,” and Best Country Song for “Space Cowboy.” Golden Hour has been named Apple Music’s Global Album of the Year, and has been hailed as of the best albums of 2018 by everyone from NPR, Time, Rolling Stone, Billboard, Pitchfork, Entertainment Weekly, Esquire, Complex, Consequence of Sound, USA Today, Noisey, People, and Vulture, among others.
–